Noda Megumi (Ueno Juri), nicknamed Nodame, is a piano student at Momogaoka Conservatory. She is messy and slovenly, but possesses an amazing talent for memorizing and performing music at 'cantabile' speed, so that it may be accompanied by singing. She dreams of becoming a kindergarten teacher. Chiaki Shin'ichi (Tamaki Hiroshi) is the conservatory's best student. A proud offspring of a musically talented family, he studied all over Europe where he met his mentor, Sebastiano Vieira. An excellent violin and piano player, Chiaki dreams of becoming an orchestra director, but due to past trauma he cannot travel by ship or plane, and therefore cannot complete his studies abroad.

One day, while taking a stroll to coll off his frustration, Chiaki hears someone playing Beethoven's Patetica in an extravagant, yet exceptional manner. He then finds out that the person playing the unusual tune is also his messy and lazy neighbor. A bond between them is born when their piano teacher assigns them one of Mozart's pieces for two. Their personalities couldn't be any more different, yet an unique relationship is born from the meeting; one that pushes both of them toward growth and self discovery. Nodame falls in love with Chiaki and does little to hide the fact, while he has more difficulties in admitting his feelings for her.

Mixing things up further is a strange man, German teacher Franz von Stresemann (Takenaka Naoto), who decides to gather the school's least talented students into an orchestra of his own. Chiaki is conscripted as director of this orchestra, and his skills are finally put to the test. A score of new musician friends joins the Nodame-Chiaki couple: rock violin player Mine Ryutaro (Eita); percussionist Okuyama Masumi (Koide Keisuke), violin player Miki Kiyora (Mizukawa Asami). In the drama's eleven episodes Chiaki faces his first challenges as orchestra director, while Nodame matures as a musician and finally takes decisions fundamental to her future. 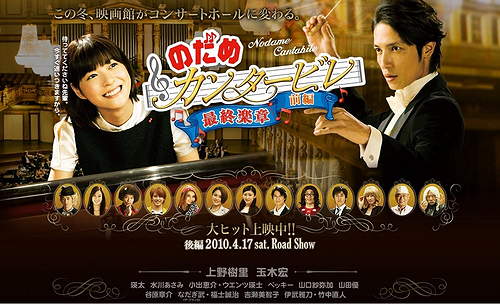 Given the drama's astounding success, gathering 18,9% share, Fuji TV produced a special two-part drama aired in 2008 – Nodame Cantabile in Europe – that confirmed the drama renzoku's success. This drama is set in Europe, where Chiaki and Nodame moved in order to further their respective music careers. In the theatrical conclusion of the story, Nodame Cantabile Saishū Gakushō (のだめカンタービレ 最終楽章, Nodame Cantabile: Final Score), again a two-parter set in Europe, Chiaki is finally an orchestra director and Nodame is close to graduating.

The success of Nodame Cantabile is astounding. Nonomiya Tomoko's original 25-volume manga was turned into three anime series and OAV, but also into a video game and a series of music collections on CD. The drama itself spurred the publication of a series of records featuring the score, as well as all music mentioned in the show, along with various gadgets (including the piano-patterned bag worn by Nodame).

Why has Nodame Cantabile been this successful?

Nodame Cantabile brings together the allure of classical music' refined world with the charm of an university-set comedy with romantic elements. Chiaki and Nodame are more than the faces of an over-the-top love story; they are also two people who grow professionally and on a personal level in order to find their place in the world. The university setting, often used in josei and drama, represents a fundamental step of life – in Japan and abroad – as it's the moment that defines future ambitions and hopes.

Music is an universal language, and the cultural riches of classical music seem to be a stimulating hook to turn audiences on. Nodame Cantabile had the merit of taking classical music to pop avenues such as manga, closer to the general public yet preserving its 'high culture' essence.

The comedy aspect of the manga is heavily emphasized in the drama and the movie releases: there is plenty of absurd situations, strange happenings and quirky characters – along with a big helping of graphic post-processing like one would see in a comic or an anime.

Nodame Cantabile is published in Italy by Star Comics.