The shape of the ice: the minazuki of June

The shape of the ice: the minazuki of June

Often, when I go shopping at a depachika デパ地下 (underground floor of a department store, where national and imported foodstuff is sold), I find myself staring at the confectionery stands. Whoever has been to Japan probably ended up doing the same, as the beauty of local pastries is difficult to ignore.

I am not talking about European-style pastry, which is also popular here in Japan, but the beautiful variety of national confectionery. The terms 'beautiful' and 'confectionery' might look pretentious side by side, but fact is that Japanese sweets are often little works of art that one could simply look at, and still be satisfied.

One day, while I was chatting with my friend Sawa we happened in front of one such stands and, noticing my curiosity, she told me “Did you notice? Each month has its own pastry!”. So I discovered that, in Japan, each month has its own pastry, that you can find and buy only then. They are called kisetsu no okashi 季節のお菓子 (seasonal sweets), and they can be found in almost all shops or department stores, either made following strict tradition; or variously revisited according to the maker's whim.

These sweets are meant to represent the season they are sold in, and the aim is to pique all of the buyer's senses; to achieve this, their visuals are carefully designed (mimicking the season or the month's colors), as well as their smell (through the use of seasonal ingredients) and, of course, taste. They are tiny culinary masterpieces, that allow the consumer to experience the season's essence through all five senses.

For example, in April one could eat sakuramochi 桜もち, pink-colored and sakura-scented mochi paste, which s meant to recall cherry blossom. Some go as far as including cherry leaves, which are actually edible!

In May we could get ourselves some wakaayu 若鮎, a fish-shaped sweet that is the filled with shiratamako 白玉粉, an ingredient made from rice flour. The shape of the sweets resembles an ayu (Plecoglossus Altivelis), a fish that lives off the Hokkaido coast and that climbs rivers to lay eggs in May.

In June, around the end of the month, one could eat minazuki 水無月. It's a triangular sweet made with a uiro 外郎 (sugar and rice flour) base, upon which a layer of red beans, azuki あずき, is laid. 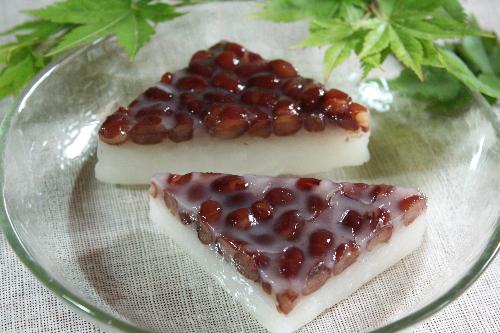 The triangular shape is supposed to resemble a piece of ice. This confectionery, according to tradition, is quite old in origin: according to the ancient calendar the 1st of June was the day of ice and, on that occasion, the nobles and the government elite would perform a ritual, which consisted of eating a piece of ice, aimed at warding off excessive heat in the coming torrid season. It was also believed that such a ceremony would bless one with long life.

In order to emulate the upper classes, the less wealthy who could not afford ice in summer devised this confectionery so that they could still perform the ceremony and reap its benefits.

One last trivia: where does the name minazuki come from? The most pragmatic explanation reminds us that the genitive no の was written as 無 in classical Japanese. June was originally called 'the water month' (水の月) as it was the time when rice paddies were flooded with water in order to cultivate the cereal.

Whether the legend is true or otherwise, today one can taste excellent minazuki in all of Japan; eaten at the end of June, halfway between the beginning of the year and its end, they bode for a positive transition between the year's halves.