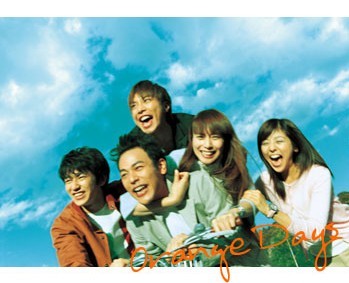 Kai (Tsumabuki Satoshi) is a fourth year psychology student who, much like his colleagues, is prepping up for graduation and employment. One day, while taking a stroll through the campus, he notices a beautiful girl practicing violin, and he finds himself drawn to her. He soon finds out that the girl, Sae (Shibasaki Kou), has lost her hearing due to a childhood illness, and can now communicate only through sign language. Her problems sometimes make her standoffish and difficult to approach, yet Kai manages to weasel his way in through determination and care. Their bond, predicated on their mutual need to find security and professional success, becomes stronger every day, changing into love. Around the two a group of friends forms: Keita (Eita), Shohei (Narimiya Hiroki) and Sae's friend, Miho (Ozawa Akane). A love triangle forms between these three, yet their friendship will manage to endure.

Orange Days is a beautiful growing-up tale inspired by those years in which one grows both as an individual, and as a member of society. The final year in University is when work placement begins, and is therefore an important transition phase which largely determines a newly graduate's future. Orange Days also narrates the sometimes unusual paths the five main characters take to this regard. While Kai and Miho choose a goal that is the natural development of their studies, Keita must decide whether he intends to continue the family business, Shohei seems to be interested in becoming an artist, and Sae attempts to earn a living as a musician.

An important theme of this drama is the deafness of the main protagonist, Sae. Most of the series focuses on the daily difficulties the girl must face in relating to others; yet, we pitfalls of pity are deftly negotiated. Sae is a perky and determined character, who eventually finds the inner strength needed to overcome insecurity.

Orange Days is not the only successful drama which deals with deaf protagonists. 1995's Ashiteru to Ittekure (愛していると言ってくれ, 'Tell me you love me'), whose male protagonist is deaf, was well received and triggered a temporary public interest toward sign language.