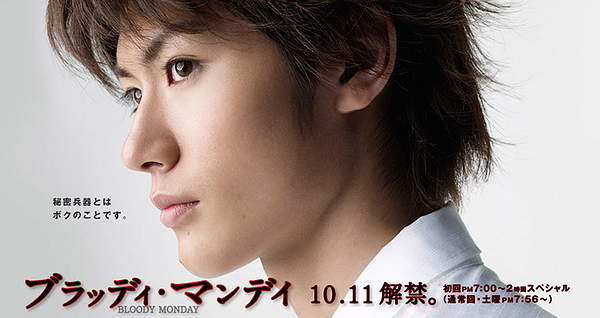 A biological attack kills off the population of a russian city. The same terrorist organization behind the attack releases the lethal virus Bloody-X in Japan as well. Tackling the threat is the Public Security's third unit, Third-I, supported by young but talented hacker Takaji Fujimaru (Miura Haruma), nicknamed Falcon. The drama, based on the manga of the same name, was met with good results, and earned some fame as the Japanese version of American tv series 24.

Bloody Monday 's second season aired in Winter 2010. Two years after the conclusion of the saga's first part, Fujimaru is once again collaborating with Third-I in foiling yet another menace, this time around of the nuclear kind.

Bloody Monday differentiates itself from similar police shows and suspense dramas as it touches on a timely and delicate topic in Japan, domestic terrorism from religious organizations. At the side of the charismatic leader we find a cohort of disquieting characters, ready to achieve their goals by any means necessary. The show never deals in splatter, but there is no lack of intense scenes nor deaths of key characters.

Bloody Monday's first season is the most successful one, where the tension never lets off and plot twists come one after the other. As it's usual with TBS productions, CG animations and special effects are top notch. The second season does not keep the same level of quality: the screenwriting is weaker and generally less poignant, including a less than successful plot wrap-up. The second series' ratings, quite inferior to the first's , might be one of the reasons why the manga's third part was not adapted in a third series.

The cast is, however, top notch for both seasons. Main actor is Miura Haruma: eighteen at the time of the first season, back then he was already a veteran, working on a number of productions including Koizora (2007 movie adaptation of the famous keitai shōsetsu). Following success, he found further popularity by starring in tv ads. He even appeared as hacker Falcon in a HP advertisement.

Other actors whose popularity was boosted by Bloody Monday were Satō Takeru, who then starred as Rurouni Kenshin's protagonist; and Kichise Michiko, who then starred in Mōsō Shimai and Hagase no Onna as a protagonist. Also noteworthy is the participation of Narimiya Hiroki as J.

The manga, written by Ryūmon Ryō – one of Kibayashi Shin – and illustrated by Megumi Kōji, has been published in Italy by Star Comics.