A column completely dedicated to Visual Kei, by Stefania Viol.

One of the most striking tendencies within Visual Kei, one that might befuddle Western listeners, is so-called Angura Kei: that is, bands that include, in their aestethics and sound, traditionally Japanese elements.

Performers walk onstage clad in elaborate and wildly colored kimono, and often include traditional instruments such as koto and shamisen along more traditional rock instruments like guitars and drums. These elements, together with melodies that often recall traditional music, find rationale in the concept of Wafū Rokku, 和風ロック, Japanese-inspired rock music. The genre's ties to tradition are also evident the bands' lyrics as well: in an essay on the subject, Agne Steponaviciute explains how this tendency could be explained as a sort of Japanese localization of the Gothic aesthetic, through which the latter is reworked and made more palatable to domestic audiences: vampires and roses, staples of the Gothic look, are here replaced by supernatural beings such as oni and other demons, and the sakura flowers take the place of roses as symbols of human fragility and ephemerality culled from tradition. The genre poses itself as a middle ground between local and European culture, and could be described as 'Gothic made in Japan'. 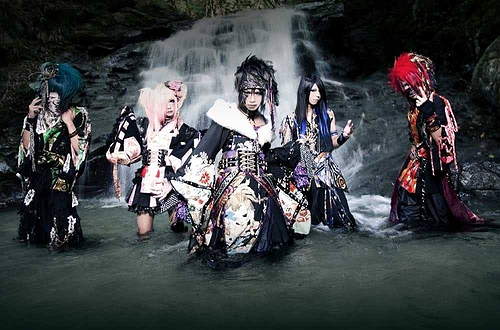 Up until recently the genre's main performers were Kagrra (disbanded in 2011) and Onmyouza, but now another band has come to the fore in the genre: Kiryu. After signing seven years ago with BP Records, one of Visual Kei's most important labels, the band is renowned inside and outside Japan for its elaborate look in which every element is charged with the mystique of traditional Japan. The sets for their videos are also in theme, featuring paper screens, temples and typically Japanese landscapes.

The band' instrumentation is typically rock, yet Kiryu still manage to weave tradtionally-sounding melodies accompanied by complex lyrics, laden with Japanese symbols. Kiryu is not to be missed by all Visual Kei and rock fans, as well as anyone who is fascinated by the kind of Japanes aesthetics that the band evokes so well.