For our new editorial column dedicated to visual kei, Stefania Viol introduces us to BORN; an indie band that should be well known to the genre's enthusiasts.

Founded in 2007 and signed with Indie PSC, the band has 'THE BLACK POPULAR' as a core concept. Black is the fulcrum of both their image and their music: a color which allows nothing to influence or change it, a color that creates a world apart in which the band's 'BLACK MUSIC' thrives. BORN brings forward an aggressive and heavy sound, accompanied by intense and transgressive lyrics: key in their discography are 'DEMONS' (June 2011), 'RADICAL HYSTERIA' (March 2012) and 'SATISFACTION?' (November 2013)! A transgressive image could pigeonhole the band into niche popularity, yet their technical and artistic prowess gained them some acclaim among Visual Kei fans world wide and, in summer 2014, the band performed in a 7 gigs tour of Europe, touching 5 countries in collaboration with Lycaon: 'BORN x Lycaon EU Tour '14 – THE RAMPAGE -”. 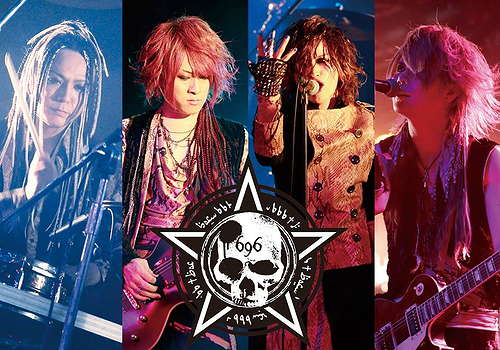 The synergy of music and live performance gives birth to an explosion of energy, igniting the soul of the listener and shaking the venue. BORN puts great emphasis on the live aspect: shortly after releasing “THE STALIN -666-”, a series of tours centered on this album took place. The second tour's final gig, “BORN LIVE 2014 – THE STALIN – SECTION 2_ [BRAINWASH]”, took place on December 29, 2014 at the Shinjuku BLAZE in Tokyo,and is scheduled to be released as a live CD / DVD on March 11, along with four unreleased tracks.

The concert showcases a stellar performance, and it features a 29-song setlist that culls from the recent album “THE STALIN -666-” and single Son of a Bitch, as well as some band's classics such as Chemical Romance, White Harmony and “RADICAL HYSTERIA”. While unlikely that a recording could capture the power and energy that the band pours into its livesets, the release promises to be a classic for BORN fans and rock listeners alike.

Beyond “LIVE THE STALIN”, the band will undertake the third leg of its tour, BORN TOUR 2015 – THE STALIN – SECTION 3 – [HEAVEN'S ADDICTION] on March 28 in Nagoya, the Osaka on April 9, and finally at the Shinjuku BLAZE on April 26.

Highly recommended: you will not be disappointed!