Some games make history, opening the doors to whole new genres and perspectives.

Some of them are very well known, like Pac Man or Super Mario, while others are unknown to most, often because of language barriers.

One of these is Portopia Renzoku Satsujin Jiken ポートピア連続殺人事件, also known as The Portopia Serial Murder Case, a 1983 adventure game by Yūji Horii (Dragon Quest, Chrono Trigger) for NEC PC-6001 and other machines.

Why is Portopia so important? It was the first adventure game for PC and NES, it defined the visual novel genre (one of the best seller genres in Japan) and inspired Hideo Kojima (Metal Gear Solid) to become a game designer. This, without considering the many technical innovations.

In the early '80s, Horii worked as a freelance writer for Weekly Shonen Jump, but was also an amateur programmer.

A few pages from Dragon Quest no Michi ドラゴンクエストへの道, published by Enix in 1990: it chronicles the creation of Dragon Quest, as well as the life of its creator Horii. The scene shows his editor convincing him to take part in the contest.

With the prize money, Horii left for the US along with Koichi Nakamura 中村 光一, who had won first place with the game Door Door ドアドア. Horii attended Applefest '83 in San Francisco, where he tried out Wizardry, an Apple II game inspired by Dungeons & Dragons. As soon as he was back into Japan, Horii bought an Apple II just so he could play the game. 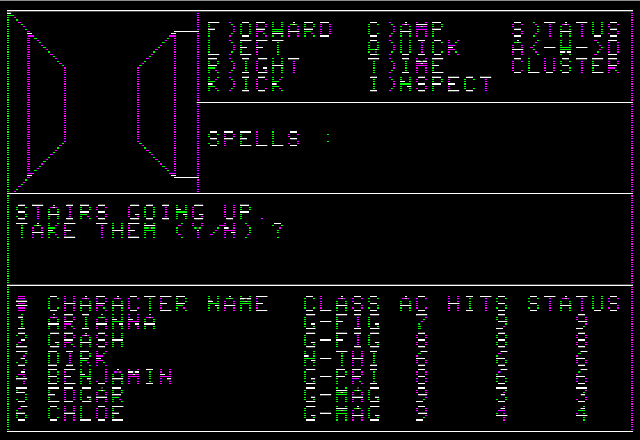 Eventually, Enix hired him and published for PC the programming contest's winning titles.

In 1983 Horii wrote and directed for Enix Portopia, released for the NEC PC-8801.

This early version was very different from the better known Famicom one.

First of all, it was very slow due to the machine's subpar calculation power.

Each image was rendered slowly with points and lines. Also, because of machine limitations, only katakana could be used, and very command had to be entered through the keyboard. 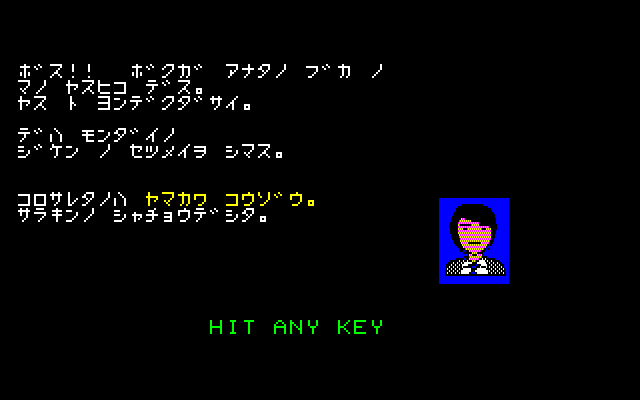 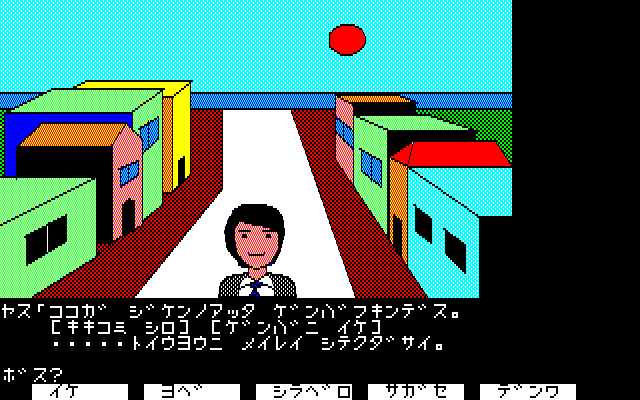 In spite of its shortcomings, the game was successful enough for Enix to release it for PC NEC, MSX, and FM -7/8.

From that moment, the visual novel and adventure game genre began to gain ground, and many more developers dedicated themselves to emulating Portopia.

In 1985 Horii was already designing Dragon Quest, which he intended to release quickly for the Famicom. According to Enix, however, the Famicom was known to the public as an action game platform, so the team decided to postpone release while waiting for RPGs for the Famicom to become more readily acceptable.

In preparation for Dragon Quest, Enix released Portopia for the Famicom, with a few tweaks and changes.

As the platform had no keyboard, dropdown menus were added. The command system was designed by Horii and took the name of Command Select System komando sentaku shistemu コマンド選択システム, an innovation that is still commonplace in adventure games and RPGs.

Still, the Famicom had no 'save' setting, so the game came with a notepad where one could write down clues, suspects and other information.

We are in Kobe, where successful loan businessman Kouzou Yamakawa is found dead by his secretary, Fumie Sawaki, inside his mansion. The room where the body was found is locked, so the police is confronted with a locked room murder. 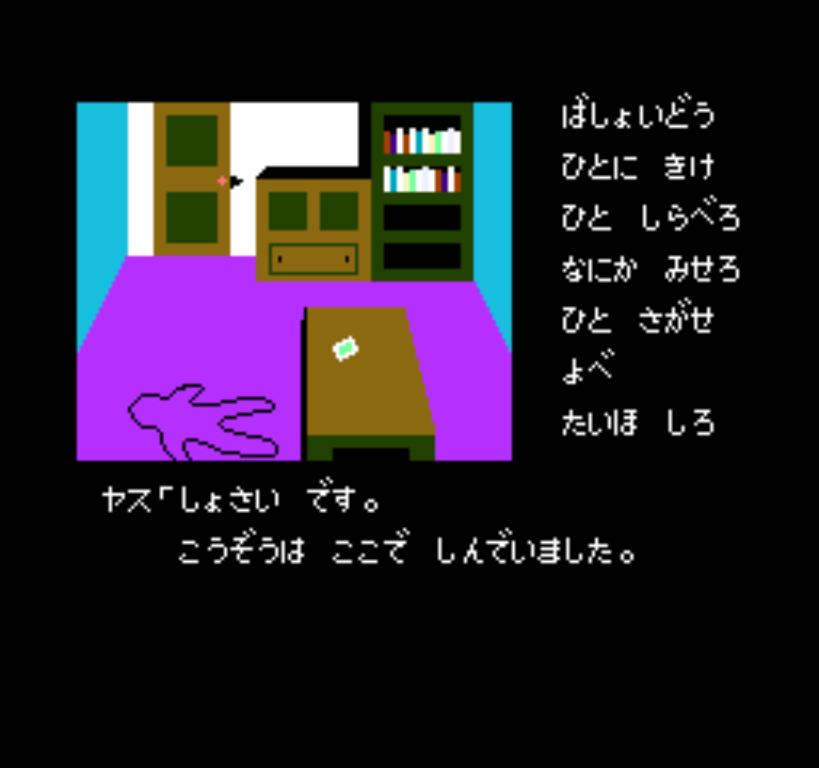 Clues point to a suicide, but there is more than meets the eye...

The player interacts with the game world by ordering around Yasu, who fulfills duties for his 'Boss'.

The whole game is set in Hyogo prefecture between Kobe landmarks (the port, Hanakumacho, Shinkaichi), Awaji island and occasionally Kyoto.

The game's ties to real life places is underscored by the its title: Portopia was the name of an amusement park located on the artificial Port Island, built between 1966 and 1981 to host the Portopia 81 Kobe expo.

The island is not visited in the game proper, yet the ferris wheel is often visible (the amusement park closed down in 2006).

Sleuthing is advanced by selecting command prompts, such as 'change place', 'follow someone', 'show', and so on.

Particularly important is the 'call' command: as the game is set before the cellular revolution, the command is available only where a phone can be found. Knowledge of Japan's area codes is also necessary.

Along with commanding Yasu to check backgrounds or records, the player can also investigate scenes and clues through a magnifying glass. In a couple of instances, the detective will be required to undertake a long and difficult 'pixel hunt' in search of crucial evidence, with no clue available.

The player also has a 'hit' command at their disposal, which can be used against objects and people alike (just don't mess with Japanese police!).

A few suspects in need of interrogation: commands such as 'hit' and 'take' could prove to be useful.

On out way to the mystery's solution, we will often pursue people seemingly tied to the murder, just to find out we've been barking up the wrong tree all along.

The game is also notable for the absence of a 'game over': should we declare a wrong culprit, our boss will reprimand us and immediately reopen the case.

Among the many places visited, there is also a long and intricate labyrinth, added by Horii for the Famicom version, and reminiscent of Wizardry's gameplay. 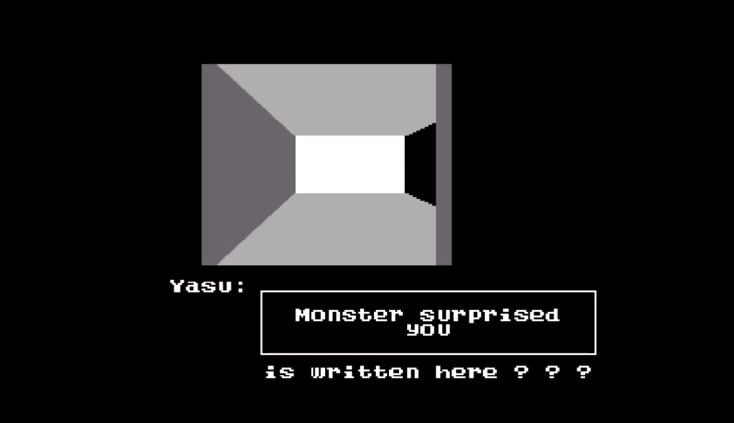 Inside this labyrinth, we switch to a first-person, RPG like exploration system.

Using our controls, we'll be required to explore a maze of corridors while looking for clues (as well as the exit) and maybe a few Easter eggs – as when we're confronted by a signpost, warning us of a non-existent monster to be defeated. 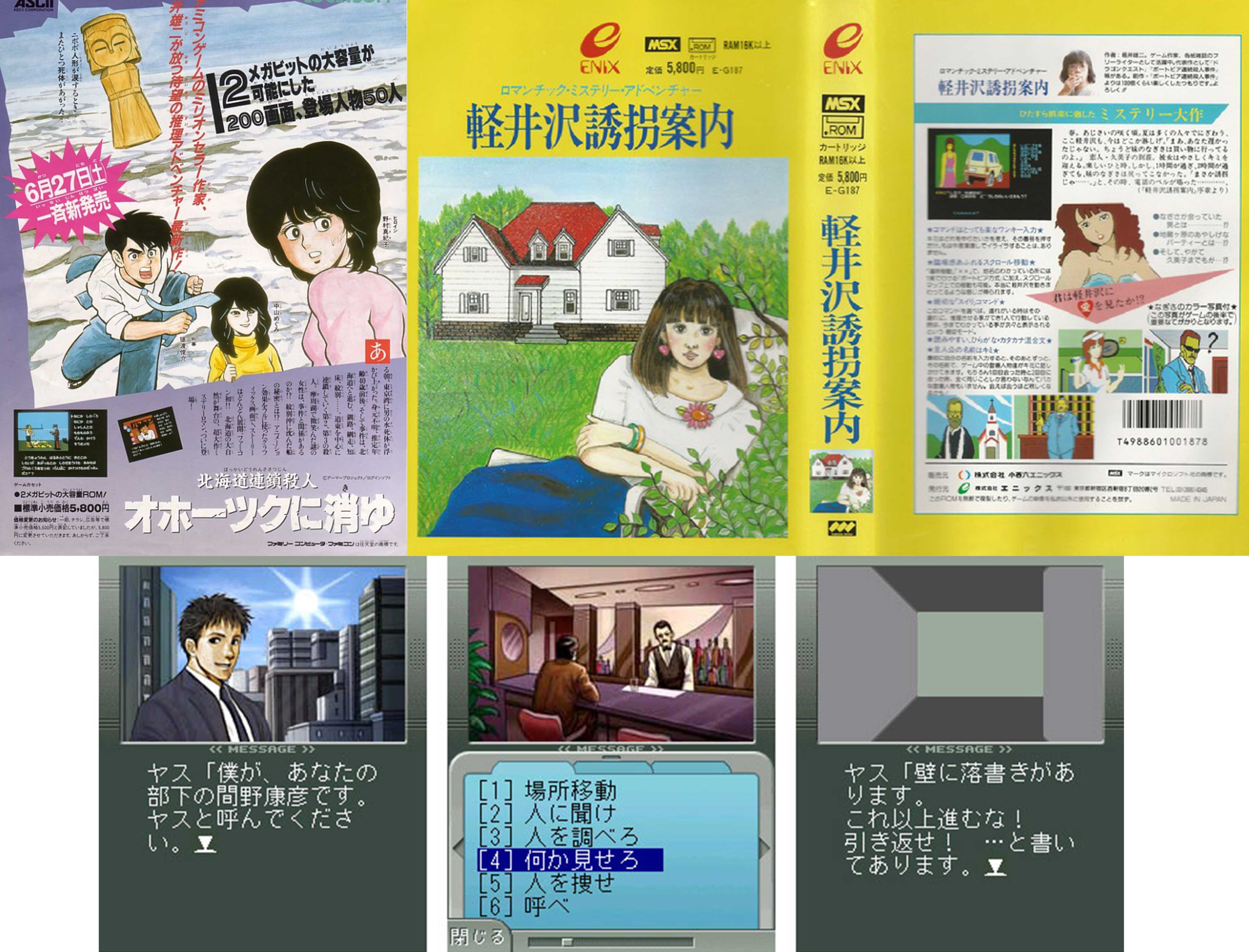 The game's mobile version, an ad for an early version of Hokkaidō, Karuizawa for MSX.

Portopia Renzoku Satsujin Jiken is now available on the web in different versions, all of them rom that require an emulator to be played. There is also an unofficial English version, thanks to the DvD Translation team.

In the next installment, available next week, we'll reveal the culprit's name (known as Japan's most famous criminal!), as well as a few trivia on him and his identity. We'll also discuss the game's legacy and enduring popularity.