Ketsuekigata-kun: talking about… blood has never been this fun!

Ketsuekigata-kun: talking about… blood has never been this fun! 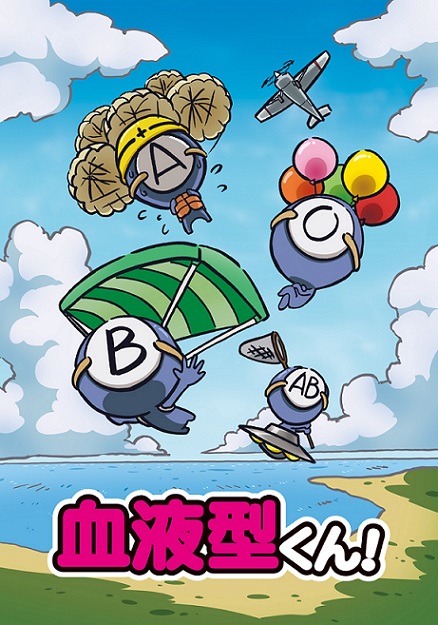 Imagine a friendly introduction, a chat with a new friend: what would you think if, among the usual questions, you were asked what your blood type is?

According to tradition in Japan, a person's general characters and traits are decided not only by their zodiac or chinese sign, but also by the blood type they belong to. This belief can be traced back to the early 1900: it was originally formulated by Takeji Furukawa in the Twenties and Masahiko Nomi in the Seventies, and still enjoys great success. As it's the case with horoscopes, there is no scientific basis for the belief; still, talking blood type can be an excellent ice breaker and an alternative to talking about the weather. The belief is widespread: just think of how many characters in manga, anime and games are introduced by blood type too!

In 2013, Korean artist Park Dong-Sun, under the Real Crazy Man moniker, created the web comic A Simple Thinking About Blood Type, which has the four blood types as protagonists: zealous and precise A, wild individualist B, 0 the nice guy and mysterious yet sociable AB. In Summer 2014 Japan's Assez Finaund Fabric and Feel produced Ketsuekigata-Kun!, a 12 episode series which takes a jab at some of the most common stereotypes, embodying the four types with all their qualities and faults.

Each episode is about 3 minutes long, and centered around everyday life events: love, work, money and so on. Usually, A loses his cool under B's wild antics, while 0 tries to cool the atmosphere in spite of AB's intervention.

The show also features an 'educational' aspect, as it often reminds the viewer of the importance of donating blood, a commodity in shortage in Japan as in many other countries.

Ketsuekigata-kun! Is a light-hearted product, fun and enjoyable: among the laughters, it will surely make you want to know what your friends' blood type is.