As the first of two Thai films presented at FEFF 2015, director Tom Waller brought to the screen the true story of Chavoret Jaruboon (played by Vithaya Pansringarm), the last executioner of Bang Kwang, a prison in Thailand.

Forced to find a steady income to maintain his new family, Chavoret abandons life as a rock singer in order to take up a job as a prison guard. In the following thirty-five years he delivered fifty five death sentences through gunshot, until replacement by lethal injection. 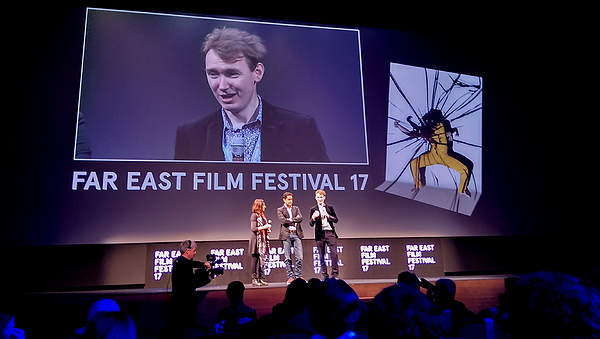 We are presented with the story of a man who needs to reconcile a difficult profession with his private life. As a profoundly spiritual and Buddhist person, he faces the dichotomy of a job that forces him to kill people and his faith, according to which evil actions accumulate bad karma. A well-arranged soundtrack accompanies sequences in which the camera narrowly focuses on few, small elements of the protagonist's daily life. A slow-motion sequence of the guard pacing through the prison, an open door still hiding what's within, close-ups of the gun's muzzle just before an execution are but a few examples. The cast is top-notch and interprets convincingly.

A film that should be watch by all lovers of the medium, in spite of a few visionary scenes lacking the power of the cruder sequences.

A well-deserved standing ovation praised the director at the end of the showing.